History enthusiasts and photographers alike are spoilt for choice in the north east, thanks to the many iconic castles in the area, each guarding an interesting tale or two behind their walls. 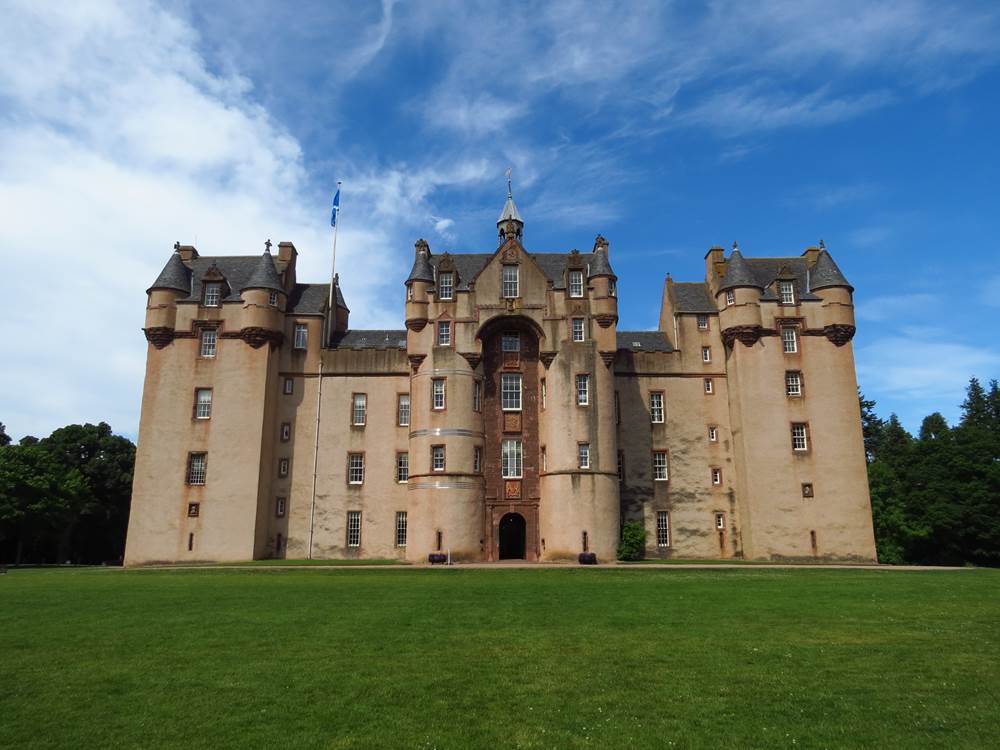 History enthusiasts and photographers alike are spoilt for choice in the north east, thanks to the many iconic castles in the area, each guarding an interesting tale or two behind their walls. Here is a selection of five which we recommend, whether you’re hoping to capture the perfect dramatic image or learn more about the north east’s colourful past. 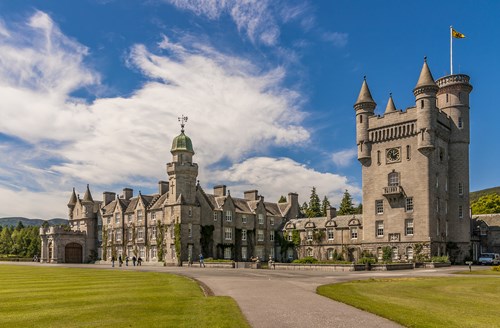 This castle is well known as the British Royal Family’s holiday home in Royal Deeside. Albert bought the estate as a gift for his wife Queen Victoria, a fan of the Scottish countryside, in 1852.

Located near Ballater and Braemar, the expansive 50,000-acre estate is made up of 150 buildings and beautiful grounds. We recommend taking a wander in the formal gardens which cover approximately three acres and feature eyecatching Victorian glasshouses.

The castle is open to the public between 30th March – 31st July with admission costing £11.50, which includes an audio tour. However, when the Royal Family visit, Balmoral is closed to the public, so bear this in mind if planning a visit. Get more information on openings times, activates and nearby accommodation here. 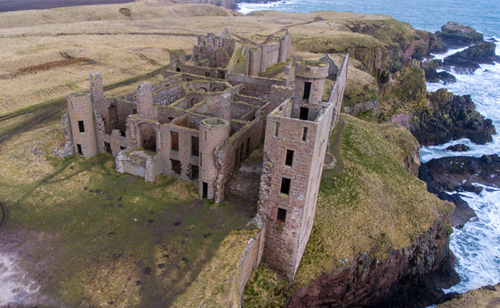 Fans of Bram Stoker’s writing will no doubt have heard of this historic spot, which is believed to be the inspiration for Dracula’s own castle. With the gaunt ruins lying on the coast of Cruden Bay, it’s easy to believe this fortress could have helped the author conjure up the ideal setting for a horror classic.

First constructed in 1597 by the Earl of Erroll, the castle has been rebuilt many times since then. The existing ruin is a result of the misfortune encountered by Slains Castle’s owners, as well as it’s clifftop location facing the North Sea. The 18th Earl of Errol, William Hay, prospered when he married the daughter of King William IV. However, the Hays later ran into hard times and had to sell the castle and its contents in 1919. The new owner, Sir John Ellerman, decided to give up the castle six years later, even selling its roof to avoid paying taxes!

You can visit this castle for free and a carpark is located nearby. 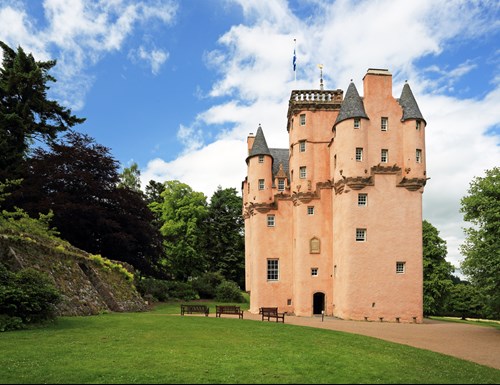 Completed in 1626, this wonderful pink castle is thought to have inspired Walt Disney’s ‘Cinderella’ castle motif. Located near Alford, it is considered to be the best-preserved tower house in Scotland and boasts some of the finest plasterwork ceilings.  Multiple turrets and gargoyles add to the fairy-tale feeling of the structure, as does the stunning backdrop of the Grampian Mountain foothills.

Craigievar has a range of artefacts, armour and weapons that can be appreciated through self-guided or guided tours. At first, the castle doesn’t appear to have many defensive qualities, however, on closer inspection, the original portcullis and yett (a gate made of latticed wrought iron bars) can still be seen.

The seven stories of the castle are said to have been worked on by famous architect John Smith and the upper floors are lit only by candlelight, preserving the ambience and artwork.

The castle is open to visitors between 30th March - 30th September with admission costing £13 for an adult or £30 for a family. Find out more here.

This impressive 800-year-old fortress near Turriff is a great example of Scottish Baronial architecture. It is home to many antiquities, oil paintings and armour, as well as an interesting glass-roofed racquets court and loch.

Built in the 13th century by William the Lion, the castle has been passed down through many family clans, including Seton, Gordon and Leith who each added their own towers to the structure. The castle is well-known for its legends, folklore and ghost stories.

When Alexander Seton resided there during the 19th century, it is believed that he left his wife for her cousin, marrying her in the castle’s master bedroom. During the ceremony, the guests heard strange noises from the window – thinking this was the wind, Alexander leaned out to close the window but saw his ex-wife’s name engraved into the stone. You can still spot this today!

The castle is open to the public between 30th March and 31st October. Admission is £13 for adults and £30 for families, which includes a guided tour. As with Craigievar Castle, Fyvie is free to visit if you are a National Trust for Scotland member. Find out more information here. 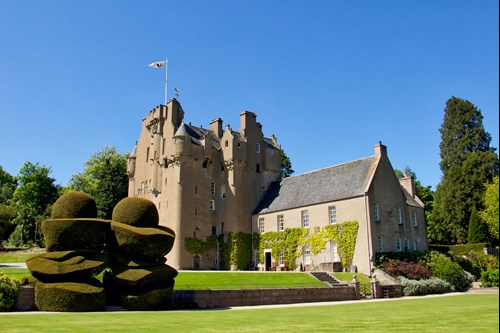 Another castle built with the area’s famous pink granite, Crathes Castle’s construction began in 1553. The land the castle sits on was acquired by the Burnett of Leys family in 1323, gifted to them by King Robert the Bruce. The castle was built in traditional 16th century tower house style and has several Scottish Renaissance painted ceilings.

During an excavation in 2004, what is thought to be the world’s oldest lunar ‘calendar’ was found in the castle’s field. Twelve pits were discovered to mimic the phases of the moon and track the lunar months. This is believed to be 10,000 years old!

There is plenty to see for nature-lovers here too, with roe deer, elusive red squirrels and woodpeckers frequenting the castle grounds. Visually-impressive yew hedges are still carefully kept, just as they were when planted in 1702.

This is another of the National Trust for Scotland’s properties and can therefore be visited for free if a member. The admission price is £13 for non-members and £30 for families. The castle is open all year round but with opening hours limited during winter. More information can be found here.

Which of these magnificent Scottish castles will you visit next?