Each of us has a spot in the North East that we hold close to our heart, and our 2018 calendar sets out to share just what these special views mean to us. August puts the spotlight on the village of Collieston. 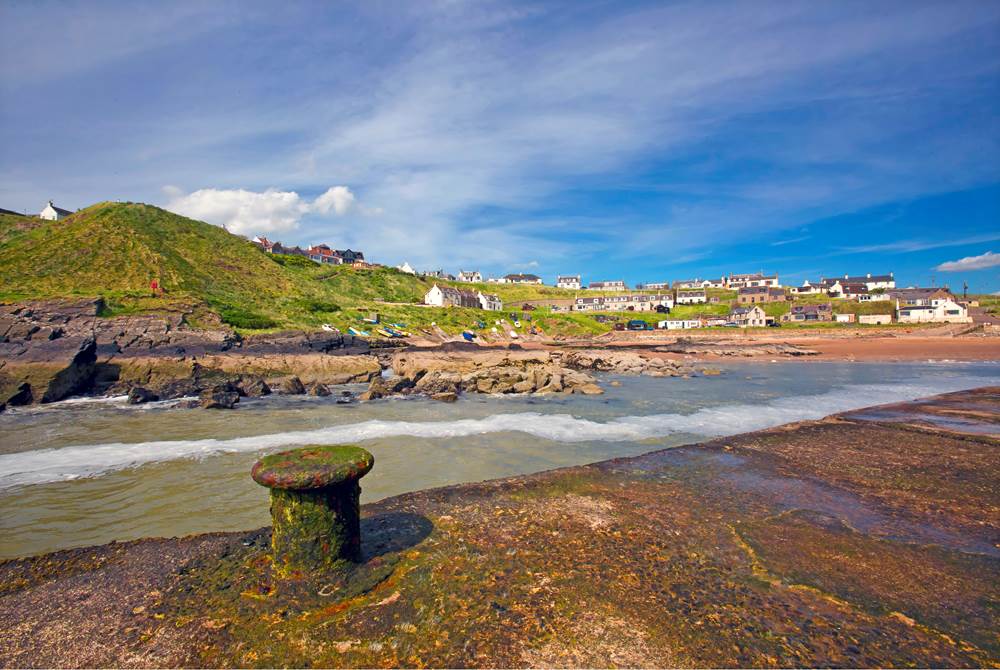 Marking the tail-end of a fantastic summer this year is the homely landscape of Collieston and the village’s harbour in particular, as chosen by the Former Director of Aberdeen Football Club, Ian Donald. “I have very fond memories of coming to Collieston as a child and spending wonderful summers with what seemed like endless blue skies and sunshine. Nowadays, I am lucky enough to be able to call Collieston my home. The stunning harbour area is the focal point of the village and provides an ever-changing backdrop for the village residents to enjoy at all times of the year.”

Collieston village is situated north of Aberdeen, nestled between the equally stunning Cruden Bay and Newburgh. Collieston is close to the Forvie National Nature Reserve, which has the fifth largest sand dunes in Britain, giving the area a visually stunning setting. Additionally, the reserve also has the largest eider duck colony in Britain. The village of Forvie was previously closely located to Collieston, however as with many other communities on the sand dunes, the site had to be abandoned due to overwhelming sand movement.

Collieston is the first harbour along 15 miles of beaches and dunes that stretch north along the coastline from Aberdeen. It was established as a fishing village in the 16th century and by the 18th century, fishing for herring, haddock, cod and whiting flourished, boosting Collieston’s economy. There is a record from 1791 which states that half of the village’s schoolchildren missed classes over summer to help collect mussels and fishing line bait. Collieston became popular for its famous ‘Collieston Speldings’, a British delicacy comprising sun-dried haddock and whiting, with the dish enjoyed as far afield as London.

The fishing village originally had a natural harbour but in the 19th century breakwaters were constructed to improve boat safety. Because of this, the harbour filled with a golden sandy beach. Later in the 19th century, the fishing economy began to decline for Collieston as bigger harbours such as Peterhead started taking on the work, as they were safer for the increasing number of large boats. The village tried to resist the decline by building a pier in 1894 but unfortunately, sediment building against it meant that the harbour was still too shallow to accommodate the larger boats needed.

Now, however, the Collieston beach breakwaters have created a sheltered area that’s perfect for visiting families. There’s some interesting history behind the beach too. It, along with the nearby caves, were popular spots for smugglers in the 18th century and at the time, it was thought that up to 8,000 gallons of foreign alcohol were illegally landing on the beach every month. In 1798, village smuggler Phillip Kennedy was killed by the cutlass of an exciseman and his tombstone can still be visited in the village graveyard.

A Spanish warship called the Santa Caterina is shipwrecked off the rocky point at St Catherine’s Dub. It is believed that the ship met its demise when trying to aid the Earl of Errol’s defence against the James VI attack on Old Slains Castle.

These days, Collieston is a small rural community where most residents work in Aberdeen. It’s also a popular tourist spot during the summer months. While taking in views of the golden sandy beach, visitors can enjoy an ice cream from the aptly named Smuggler’s Cone café. With a rich history, interesting geography and stunning harbour landscape, we can see why it’s Ian Donald’s favourite view.